No festoons or flowers, no dazzling lights or music. Still, the class room wore a festive look and the joyful atmosphere was so thick you could lean on it. The children had come in dazzling colours that matched the excitement in their faces. It was like it was everyone’s birthday.

In a way it was. Yes, West Mambalam Center of Deepam stepped into its second year on 4th September 2010 and the function to commemorate it was got up on 25th September.

And what a day it turned out to be! The class started at 9 AM like any other day, with children vying with each other to get the best book from WM Center’s library. Even though the children knew ‘Board Games’ were to be inaugurated after the library session, it was heartening to see that they were well-behaved, not wanting to rush through the books. Soon, when the modest collection of Board Games was thrown open, the volunteers appearing more excited than the kids, it was greeted with loud cheers. The games were an instant hit. 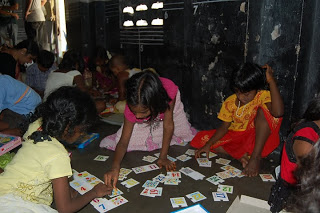 Children and volunteers formed groups and the games were played with great enthusiasm both by the kids and the volunteers. The Center’s collection of games had been procured on an experimental basis to cater to the interests of children of various levels. These included jigsaw puzzles, word games, chess, games based on numbers and shapes. The thought that these kids probably don’t get a chance to enjoy such games either at home or at school made the whole exercise very special and exciting. 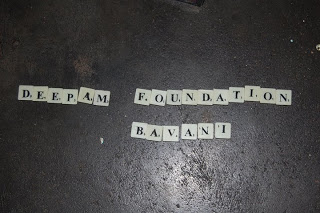 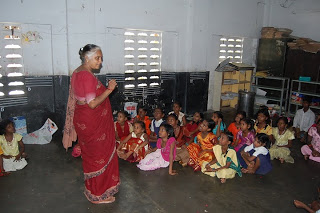 The Center had the honour of having Mrs Chitra Nagesh as chief guest. Mrs Chitra Nagesh worked as a Social Science teacher at DAV and at PSBB and currently after retirement she is working with a lot of schools and teaching Ghandian Values. It was a proud moment for Saye and Yeshwant who have attached so much value to her impeccable qualities, and today they could express their gratitude to their teacher in a way she’d feel happy and invite her over to introduce WM team to her. Mrs Chitra Nagesh put everyone at ease with her simple approach and modesty. Her talk on non-violence and appeal to all to shun violence, going deep into root causes of many a conflict, was really thought-provoking to the kids as well as to the volunteers. 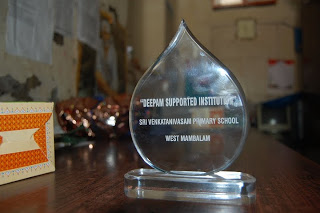 Afterwards the children enacted a beautifully conceived skit, show-casing in just 90 seconds the ideals of Deepam and how over the last one year these have been achieved in .

A fitting memento was presented by Deepam WM Center to Mrs Chitra Nagesh. In recognition of the excellent support the school’s Head Mistress, Mrs Radha, and the teachers of the school have been extending to Deepam and its volunteers, an acrylic shield with the inscription “Deepam Supported Institution” was presented to the School.

This was followed by cutting of the Anniversary cake and distribution. Children were also given in a take-home packet cakes, biscuits and chocolates.

Truly it was a very satisfying event and a memorable anniversary for Deepam WM.

Later, commenting on the event, Mrs Chitra Nagesh remarked that Deepam’s way of combining fun with teaching is something that even trained professionals struggle to achieve. 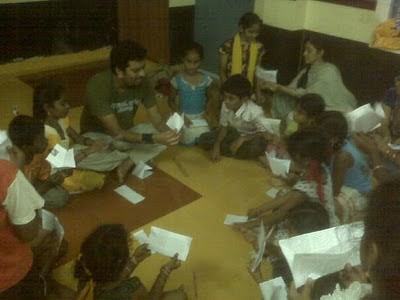 Deepam KC centre had organised a fun activity for the children. Subash Thiyagarajan , an origami expert, had a fun time with the kids at the centre. He seemed a natural, talking their language , engaging the kids in the art , commanding their attention , keeping the kids interested and amidst this fun activity, he taught us to make this paper art and also a nice lesson in maths on shapes. 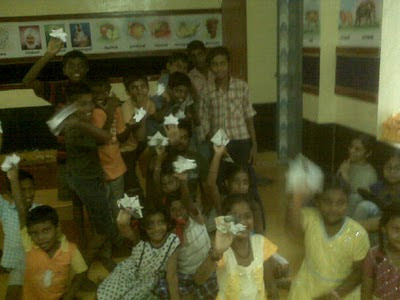 All the kids showing off the japanese samurai hat !! 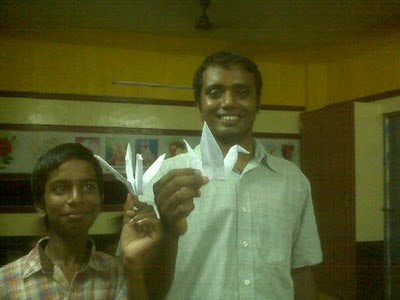 ‘Tsuru’ the bird, that we made !! I enjoyed this workshop . I was happy i made it to this class – this bird is now on my home showcase 😉
Thanks to Chandana and Gokul, for planning and organising this session. They are now keen on taking Subash to other centres. So, if you missed making this ‘bird’ , you still have a chance 😉 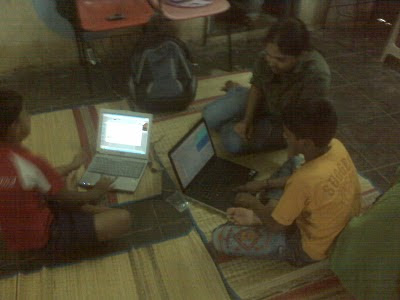 Deepam team at Pudiyador has been experimenting with a new application called SCRATCH. SCRATCH is an interesting tool – students can draw / animate the characters / record audio and play them in sync with their animation. In short, children can make a short animation movie!!
No no, it is NOT complicated – with such easy to use tools, SCRATCH makes the children enjoy this experience. How do i know if the kids liked it ? Well, the volunteers had to stay 30 mins past the scheduled close of class, since the children were so engrossed in the project 🙂 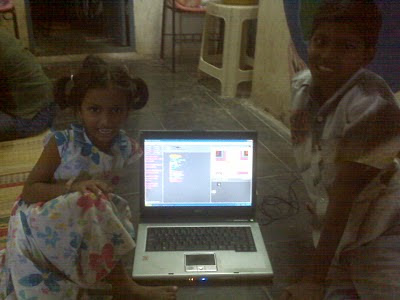 One of the kids showing off their project 🙂 – Surely, learning is only by DOing 🙂
Sooper work Ram / Santhiya / Shashi / Deepa et al. Awesome energy in the class !!

We had our first class at the Deepam WM center on Sept 5th 2009 with a dream of introducing computers to the kids and teaching English by using them as a tool and one year later we have realized this dream. It is more than a dream come true for these less privileged kids who are enjoying the english lessons taught using the netbooks. 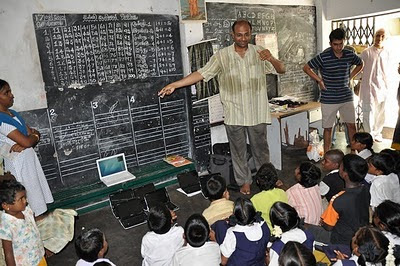 The Deepam West Mamblam center currently has 6 Dell Mini Netbooks and from the class on Sept 4th we have integrated it as a part of our curriculum. We are sure that the children will cherish learning english from the Hi Tech tool. The WM team is very happy and grateful to the sponsors for not only nurturing the enthusiasm in the kids but also helping the center take one step closer to being GREEN by helping us reduce the number of worksheets used in the class. 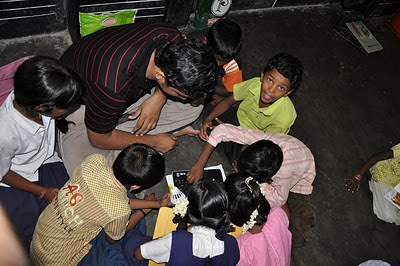 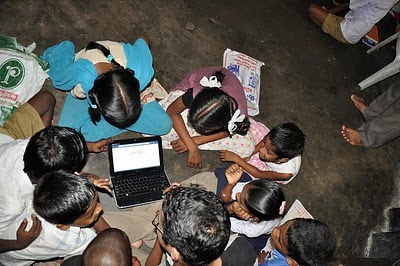 All the 6 netbooks at the west mambalam centre were sponsored by OPEN India. Just over a call , OPEN team decided to support Deepam and followed through with it. We are grateful and thankful to OPEN , IGNITE trust and Sriram Gopalaswamy and Bala from DELL for making this happen. We look forward for your continued support. Also thanks to Saye for his initiative – he came across OPEN and wrote to them requesting for support… and here it is 🙂